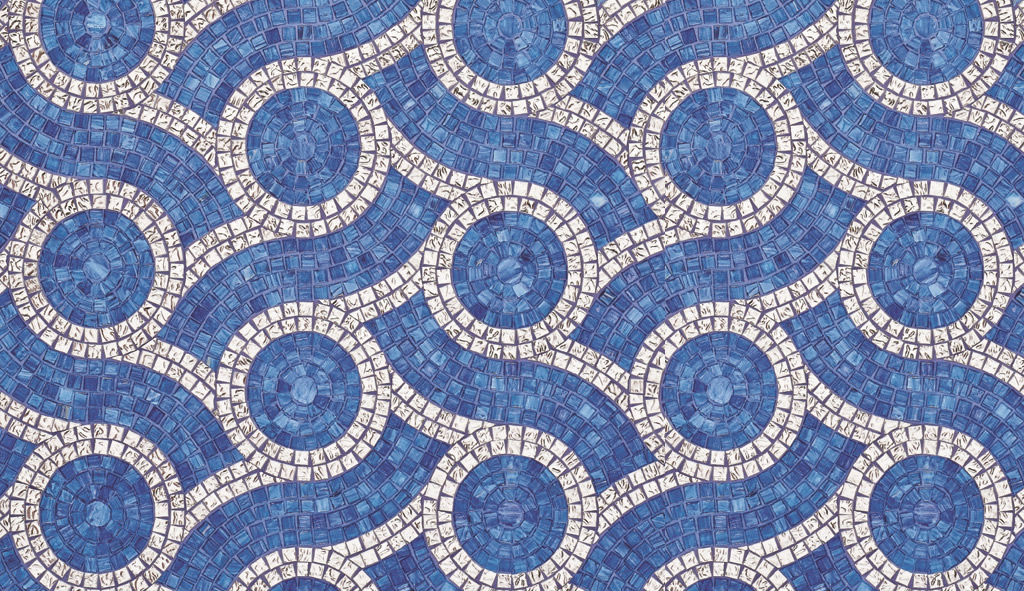 The mosaic as a plot of a renewed aesthetic and cultural heritage.

The year when Piero Bisazza decides to industrialize the vitreous mosaic, giving new light to the splendour of this ancient art through a contemporary language applied to the large surfaces of modern architecture, dates back to 1956.

If it’s true, as it surely is, that the same Bisazzas have always fed on a strong interest in the world of art, design and architecture, this peculiarity is also perceived by the Italian and international interlocutors to whom the company itself turns, following the living themes of classical and contemporary culture.

The aesthetic and punctual sense of beauty is in fact what Bisazza intends to transfer to the products intended for the vast market, inducing the same brand, which is today a world leader in the production of glass mosaic, to become recognizable in the national and international scene in its distinctive element, in which its originality always represents the “North Star” of every research and every new proposal.

The mosaic technique, though now aided by computer graphics, requires great care, manual dexterity, attention and working concentration: even today you can see how the mosaicists are real artists who work between tradition and innovation, to realize, for example, a “Roman opus” giving continuity to the cultural heritage that in this field gets to our days. All applications regarding the possible tonal blends and the original combination of colours arise that way, even today, from the primeval human sensitivity of the “author” and from his real and authentic cultural and planning heritage spendable in the world of the “form of colour”.

Therefore the Bisazza mosaic doesn’t end only in the mimesis of the Roman or Byzantine mosaic, because its production expresses the tones and colours of the contemporary world that are associated with interior spaces of modernity, thus coming closer, as a renewed discipline, to the interest of the younger generation.

Bisazza, concretely present as part of great events dedicated to design, is therefore a promoter of an important cultural sector, today a niche market: in the name of this particular aspect, he affirms his commercial presence in approximately one hundred countries around the world, feeding day-to-day a work that gets stronger over time.

In particular, the proven synergy established in recent years with the major image designers led the company to the development of processing techniques and laying of the tiles, at the same time allowing an expansion of serial production beside the development of research aimed at extending the chromatic ranges available and at the simplification of application techniques that qualify the use of that suggestive language of the decoration; these innovations confer Bisazza a great media diffusion in the field of the international mosaic proposal.

Among the most important testimonies of design and business promotion historically acquired, emerges the work of Alessandro Mendini, who in the nineties assumes the role of Artistic Director within the Company for the construction of the Tower of Heaven in Hiroshima, and with equal importance, for executing the numerous furnishings, mosaics and macrosculptures, which in various ways are inspired by this international Master of architecture and design; the meeting with the designer Fabio Novembre has the same importance. He reinterprets the work of the mosaic decoration through the mimesis of a fabric , constructed and rendered a skin that develops, through the use of colours and tonal scales, into emphasis of the threedimensional volumes that animate the small and the large surfaces of the supports.

In addition, in the recent collection “Bisazza wears Emilio Pucci” were made wonderful mosaic works with tiles cut to size by hand, thanks to the mastery of the modern mosaicists, who composed with taste and accuracy, creating varied “brush strokes” of glass tesserae, the reproductions of the famous prints signed by Emilio Pucci.

From this, it’s possible to explore the new frontiers of contemporary mosaic art, which has achieved, as it is well-known, a spectacular evolution for what concerns the shape of the tiles, the manner of their composition, the degree of their finishing, the cutting, the sheen and their own transparency, realizing the greatest expression of this art outside of those that have been for a long time the exclusive places for its application and conceding the return of a widespread use of a new mosaic which becomes, on every occasion, an integral part of the distinctive and perceptual character of the colourful environments we inhabit today. On the occasion of the Salone del Mobile di Milano, BISAZZA presented a new collection of mosaic patterns, artistically influenced by historic EMILIO PUCCI prints.
This auspicious venture between two brands – recognized internationally for their signature use of pattern and color in sophisticated, daring, and elegant pairings – is a journey toward discovering the unique and unparalleled creativity that, portrayed in mosaic art, reveals the quintessential virtuosity that distinguishes the BISAZZA and EMILIO PUCCI names.
Interpreted in generously proportioned mosaics, the new BISAZZA collection draws upon details from original prints signed by the Marquis Emilio Pucci and transforms the famous designs into virtual “blowups” of swirling color – new, stylistically refined decor pieces, created to “dressup” the trendiest interiors. The Bisazza Foundation for Design and Contemporary Architecture – a private nonprofit organization open to the public – honors the appreciation and tradition of design and architecture that has always been the foundation of Bisazza.
The Bisazza Foundation has a dual vocation: it is intended as an exhibition space to bring together works and installations by contemporary designers and architects who, over the course of the last 20 years, have created original applications for mosaics; it is also proposed as a cultural subject in continuous interaction with other international institutions for the purposes of hosting projects and exhibitions of design and architecture, not necessarily associated with mosaics.

prev
next
This website uses third-party cookies to improve your experience.
By clicking on "OK", scrolling the page or continuing to browse the site you are agreeing to our use of cookies.OK More information